The living legend Ronalds Kenins (pronounced as one person) has had quite a week with the Vancouver Canucks: he’s scored twice, taken a penalty to fit in and is a solid plus 2. He practically has a roster spot sewn up and its February. We have seen these stars come out of the woodworks before with such names as Jeff “The Brabarian” Cowan and Pavel Bure. Kenins (again, one guy) has already created a fan following somewhere as a Canuck but what DON’T we know about him? Who is this Latvian Sniper?

According to quanthockey.com, Ronalds is the 15th ranked Latvian NHLer of all time….ALL TIME!!! (Link) How did he climb the ladder so quick? Well sit down and grab a cold one cuz I’m about to shock the world, Seahawks style…too soon?

These were both of #41’s goals, STUD in Nucks clothing. Thanks Canucks.com!

Ronalds Kenins (seriously TWO plural names in one, love it) played for Latvia at the last Winter Olympics in Sochi. He shot out like a bat outta hell in 5 GP for Latvia with 0 goals, 0 assists, 0 points, a PIM and he was on the ice when Latvia scored once. But did he play in the Olympics? You bet your Snepts he did.

Kenins has played well down in Utica for the Comets this year in 36 GP, with 5 tallies and 7 helpers. (Link, theahl.com)Utica has been quite a surprise this year and Canucks GM Jim Benning couldn’t keep Ronalds away any longer, he made that call.

The struggles of Zack Kassian lately have been Kenins gain and a spot currently on the 4th line is his to lose. Kassian has been asked to be more physical for obvious reasons, get in the dirty areas and at the end of it all, he just doesn’t. Kenins has a touch to his game that coach Willie likes. He’s physical like another man in this photo. 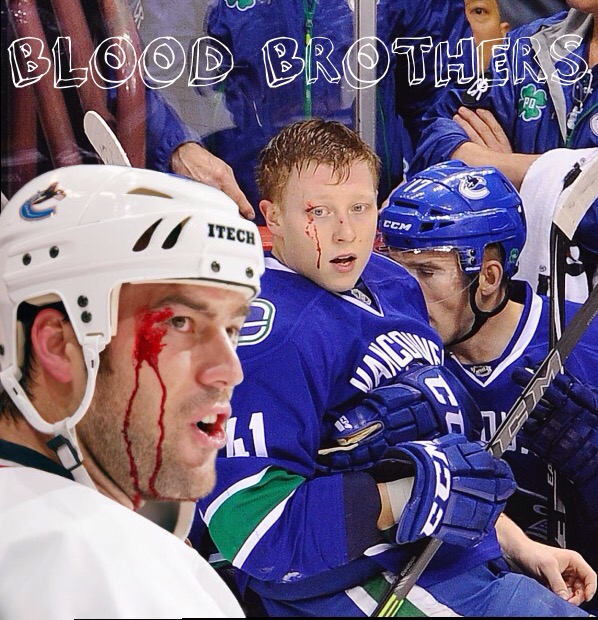 See the resemblance? Even though he has a baby face and probably blushes when pretty girls ask for his autograph, he might be a nice surprise the Canucks can utilize down the stretch and maybe years to come.

Ronalds Kenins is an intriguing character and it makes me want to add S’s to MY first and last name: Ryans Hanks….sounds awesome! The other bonus of Ronalds Kenins thats wes all loves: he’s a better #41 than Andrew Alberts will ever be. It is yet to be proven if he will overtake Arturs Irbe for most successful Latvian Canuck of all time. Time will tell, time will tell.