The week coming out of the All star break wasn’t entirely amazing. The Canucks ongoing struggle to compete has raised a lot of questions as to what is going to be done come trade deadline. This past week the Jets, Sharks and Penguins came to town and man was there stuff to talk about. On top of all this we unearthed some new story lines. So without further ado, JARKKO!………..POLO!!!

Ok what? Why is he a healthy scratch? Nevermind, we’ll get to that. The Winnipeg Jets came in to Vancouver losing 4 straight, but the Canucks came into this game hoping to score. Eddie Lack got the start and he was ready to make the most of it, you know, because it might be his last….just kidding, it’s not like he has a 10 year contract. Vancouver gave up the early goal again and had their work cut out for them. Alex Burrows took a swede feed from Daniel and tied it all up.

Back and forth they went and rising star and multiple named Ronalds Kenins tied it up once again and scored his 2nd in as many games. The game would need overtime and the obvious happened: a 2 on 1 break with Radim Vrbata setting up Luca Sbisa for the GWG. Just like we all drew it up. Lack got the win and it looked like the week was starting out great!

So later on we would find out Evander Kane wore sweatpants to the game and was not asked to participate. There are many reports of how this all came to be but at the end of the day, Kane looks like he is on his way out of Winnipeg; Vancouver’s gain? But really, SWEATPANTS??? CMON MAN!! They must really not want him on their team. I hope Kane comes back with a vengeance and torches those old planes.

Next up was the San Jose Sharks. The Canucks just can’t seem to beat these guys and this game was no different. Injuries to Chris Tanev, Frankie Corrado and Kevin Bieksa have totally maxed out what the Canucks can offer on the blue line. Adam Clendening and Luca Sbisa are now top 4 dmen. Not good.

Ryan Miller had to put on his hard hat to start the game and was peppered all night. 11-2 were the shots in the first and thankfully it was only 1-0 at that point. It didn’t end well for our Canucks and they were willfully beat down by the Sharks 5-1. Radim Vrbata was the lone Nucks scorer but he can’t score 5 a game.

With the healthy scratching of Zack Kassian for 3 straight games, all the questions about where the goals were coming from and inconsistent goaltending, something had to give. The Canucks were about to host the Penguins and quite frankly, we were all expecting to get plastered. That could be taken a few ways 1) drinking heavily because that helps the pain and 2) the score was going to be unwelcoming.

Sidney Crosby was in town and again the Canucks were facing a team that had played the night before. Ryan Miller got the start again as number ones usually do but it was the play of pretty much everyone in front of him that was the story on Hockey Night in Canada.

Burrows put the Canucks up early, Bo Horvat got his name on the scoreboard and the Canucks were up 2-0 after one. Pretty happy team. It didn’t end there. A disallowed goal by Pittsburgh and a Shawn Matthias laser had Vancouver up 3-0. The real story though wasn’t Crosby, the team’s swiss cheese defense or Miller’s soft goals every game; it was Zack Kassian.

Late in the 2nd, Thomas Greiss misplayed the puck behind his net and Linden Vey set up Zack Kassian with a wide open net and he buried it. A slump buster for sure and potentially a sign of things to come, Kassian was rewarded for going to where he needed to be. Canucks fans right through Rogers Arena applauded Kassian like he had just scored to win a series.

Earlier on, Zack was in a tussle and questioned what his hands needed to do. Looks like scoring a goal was the cure. Kassian has been on a roller coaster from when he first arrived in Vancouver and it’s tough to say how his story will end here. The fans love him and want to see him succeed but he has to want to give that extra effort to make it happen. 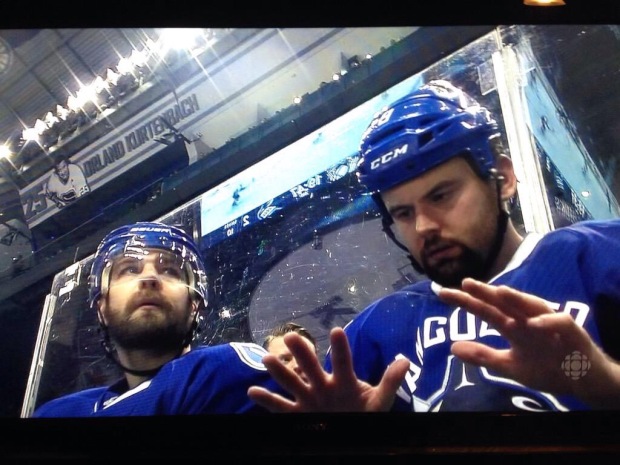 (Insert pretty much any awesome self realization joke here)

The Canucks shutout the Penguins 5-0 and they looked like a team that could beat anyone. It was a welcome change from the swamp hockey they were playing for chunks of the season.

We should have a better lineup again soon, injuries only last for so long. It’s great to see the smile on Zack Kassian’s face; he has potential but everyone has to be patient. As for Ryan Miller; he needs to up his consistency because he’s getting paid to be consistant.

All in all a fun week despite the lack of people in the stands.

So the @thepp1podcast needs your help: We can’t decide which two sandals from @summerskates to produce. These will be available for purchase and potentially for a contest win. What one do you want to see on YOUR feet? #walkthetalk #summerskates #summertime #blackonblack #hockeylaces #golfslides #beachslides #lockerroomslides
Good morning
My main Christmas present this year was Central Perk from @friends x @lego. Over 1000 pieces and one cappuccino later I’m done. Hey @brentonontourpodcast I’m ready for the journey for Java! #building #legoideas #kelowna #coffee #coffeeshop #illbethereforyou #couldthisBEanycooler #iwasonabreak
I am officially submitting my name for @tomsachs MarsYard 2.5 #nikecraftweartester and despite my rookie video skills I’m ready to see what these shoes can do. Used? Bring it on. Brand new? Let’s see how long they’ll last. Will they survive the dreaded lazy slip on shoe that destroys heels or will they last soaking in a puddle? I’ll bring my tool belt for anything these shoes can handle.
Thank you so much to my friend @kasey.sorsby for the Christmas treats she dropped off at work today. Kasey goes above and beyond with everything she does. Kasey, have a Merry Christmas!