The horse for all intents and purposes is dead. We’ve all beat it senseless and yet there always seems to be one or two people who never had a chance to join in. A morbid intro to remembering the 2011 Canucks playoff run? Safe to say that’s a yes. There have been a few reminders lately about how good that 2011 team was and unfortunately how great that Tim Thomas character was as well.

Not one to be left out, I scoured the WWW. to find a handful of stats that either no one bothered to dig up, care about or had deemed beyond useless. If you know me by now, you have a good idea where this could be headed. I will state one thing:

The Canucks still lose the Cup Final so don’t come looking for anything different. This isn’t actually one of the stats.

Raffi Torres Was a Sniper… of sorts

He played in all but two games in the playoffs (suspension or something) and had an astounding 15% SH%. Amazing right? It’s not actually and he only had 20 registered shots on net but he scored on three of them and whoa nelly! were they memorable. He led all Canucks that postseason and everyone remembers they weren’t exactly high scoring affairs. To recap, a 15% shooting percentage led the Canucks. Maybe the rebuild should have started in say, October 2011.

Edler was a crucial part of the run and his defensive awareness wasn’t overlooked, no sir/mam. Edler blocked 60 shots and the next closest was Dan Hamhuis, with 38, who got injured after Game 1 of the SCF. I can’t imagine that was fun to do and when everyone gets bent out of shape and wants Edler to waive his NTC, based on this statistic, he probably was willing to give his life on the ice for the Canucks. Maybe slow your roll, people.

Something you probably didn’t want to hear again because he won the Cup. Thomas had a crazy good save percentage sporting a .940 and a 1.98 GAA. Power plays, 5v5, it didn’t seem to matter. Tim Thomas was freaking otherworldly. It still hurts so I’ll move on.

As you can see in the diagram below, Bobby Lu was pretty susceptible to goals in the dirty/home plate zone. That’s where most playoff goals seem to come from but imagine even a handful of those are just shots… we’d be talking about how Dan Hamhuis sacrificed himself for the greater good. Still too soon?

Jannik Hansen, Kevin Bieksa, and Dan Hamhuis were the only three Canucks in the Top 50 for plus/minus in the playoffs. Hansen with 7, Bieksa 6, and Hamhuis 5; 13 of the top 16 were Bruins, just saying. Digging deeper shows the grinders were the only guys staying above the line with a few exceptions. I suppose the top players are just as likely to be scored on as they are to score.

Powerplays Didn’t Have To Be The Story

It all fell apart at the end and Boston took it to Vancouver pretty hard. The talk of the powerplay being non-existent was true but it’s not like the Bruins were scoring a ton with the man-advantage either. Daniel and Kesler led the playoffs with 5 and 4 goals respectively and Mark Recchi was the first Bruin to have his name on the list with 2. There were plenty of opportunities, but as the series wore down the Canucks it didn’t really matter who had the chances.

The Stanchion Goal Was Coming

Kevin Bieksa may only be remembered for two things league-wide when he retires: Bieksa-face and the stanchion goal against the Sharks in the WCF. Everyone was amazed as it played out and I think there is some guy on twitter that legally changed his name to it after said goal (just kidding). Anyway, if you look at the data below, it was only a matter of time before Juice hit his shot. Yes, he’s a defenseman and that’s where most of his shots come from but let me have this, it’s the last stat.

Whether or not Ryan Miller comes back to be the Canucks goaltender next season, he might just be in line for his most successful season ever. No, I haven’t been drinking and I don’t have any inside track to any trades the Canucks are about to make that would instantly catapult them up the standings. Miller is 37 years old this year and looking back to another American goaltender who had great success when he turned 37 is Tim Thomas, and he did some stuff.

For starters, I hate Tim Thomas. I don’t know if it is/was because he was such a stingy goalie or that he was so arrogant towards the Canucks or that he has a Stanley Cup and just basically left hockey. It all drives me crazy but one thing is for sure: his stats were real good that year, like Willie D “really good”.

Miller also has a catastrophic 2.80 GAA this year and it probably would take a miracle to get in the 2.00 range, like adding Drew Doughty and Damon Severson for starters. That isn’t happening as far as I know. What’s to say that Miller couldn’t just tear it up next year?

It’s not a sure thing he’s coming back to Vancouver but he has found his groove and honestly, if he had any semblance of a defensive unit in front of him, he could actually put up some serious stats.

Could the unthinkable happen?

If Miller does come back, this entire theory goes out the door. He has two NHL caliber defenders in front of him and that isn’t good enough to keep the puck away from the goal line. This is, of course, thinking Luca Sbisa is gone. He has given everything he has for the team and if he was able to play maybe 10-15 fewer games next year, he might actually do OK.

With three years in the books, Miller has built a rapport with the guys in front of him and it would be a great time to capitalize on that time. There won’t be a Cup if he stays but he could help the team stay above water while Thatcher Demko prepares himself.

Believe it or not, Miller’s tenure in Vancouver hasn’t even been his busiest. He could end up facing the 7th most shots in his career when this one is over. Last season was Miller’s only other Canuck campaign that would rank in the top-10. As far as goals go, this would be his 6th best season for GA. Father time has been good to Mr. Miller and a “defense first” system (can’t believe I’m writing that) along with finding a rhythm in net has helped him succeed personally.

As I said before, Thomas had a pretty successful 2011 season and if Miller is able to either find a team that can utilize his hot hand without burning him out or at the very least get some forwards on the Canucks that can keep the puck at the other end of the rink, he could be in line for his best season to date.

What Ryan needs to do is re-sign in Vancouver, get a new mask or just simply the same one but silhouetted black-out, same with his gear and he becomes our black knight. A goalie’s presence with just his gear is something to behold, see: Roberto Luongo. The new NHL jerseys will be released before next season and like the BC Lions came out with their RoboCop looking uniform, so could Miller and he would take no prisoners.

These are some pretty shaky parameters but it’s possible that Ryan Miller is saving some of his best hockey for the end of his career. Seems a bit far fetched but weirder things have happened.

I moved out of my parent’s basement and now I’m doing this from my OWN basement.

Rage Against The Machine, Tool, Van Halen, and Nirvana; for one or two nights only you would do anything to see them perform. Well, get your popcorn ready, Roberto Luongo has signed a 2 night deal with TSN to be a guest analyst during the playoffs.

Not one to shy away from the spotlight, Roberto is center stage on April 27 and 28. He is no stranger to TSN and their amazing NHL coverage; Luongo has been featured on numerous skits aired during intermissions and pre-game setups. From his time in Florida….the first time to the final chapter with the Canucks, Luongo hasn’t disappointed.

A beauty for sure

Will Luongo bring crazy antics and hijinx or will he be professional and provide quotes like “That was a good stop” or “I can’t believe that guy stole my job at the Olympics”. He is a superstar on the ice and a legend on twitter. His Twitter handle @strombone1 has just under 325k followers and most of them hang on his every hashtag. He has been testing his latest material today

Working on my "catch phrases" for my TSN panel appearance. So far I've got "look at that luongantic 5-hole" and "that goal was bluuuuutal"

Or will he pout and make excuses for his pathetic losses to yours truly in fantasy football this past season? 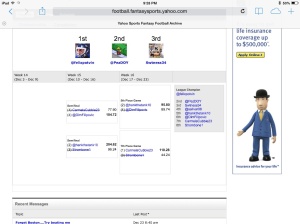 Ya, so what? I blame the snow day on my placement.
That was the 2nd time I beat @Strombone1 though

Any way you look at it, Bobby Lu will give TSN some help in the ratings department, not like they need it though.

As per TSN’s contracts, Luongo’s contract and dollar value were not disclosed. It IS however, believed to be in the Bob Mackenzie range per episode. After a bizarre season for the Canucks and Luongo, a step away from the seriousness of the game is just what the Strombone ordered.

No doubt there will be a few questions about how his season transpired but I think there will be interest in how funny he can be on camera. If he’s anything like we have see, he will easily have a TV analyst contract the second he retires.

Can’t wait to see THING 1 in a suit and greasy hair talking about his buddies Carey Price and TIm Thomas.

Hockey sure is great sometimes!

So the @thepp1podcast needs your help: We can’t decide which two sandals from @summerskates to produce. These will be available for purchase and potentially for a contest win. What one do you want to see on YOUR feet? #walkthetalk #summerskates #summertime #blackonblack #hockeylaces #golfslides #beachslides #lockerroomslides
Good morning
My main Christmas present this year was Central Perk from @friends x @lego. Over 1000 pieces and one cappuccino later I’m done. Hey @brentonontourpodcast I’m ready for the journey for Java! #building #legoideas #kelowna #coffee #coffeeshop #illbethereforyou #couldthisBEanycooler #iwasonabreak
I am officially submitting my name for @tomsachs MarsYard 2.5 #nikecraftweartester and despite my rookie video skills I’m ready to see what these shoes can do. Used? Bring it on. Brand new? Let’s see how long they’ll last. Will they survive the dreaded lazy slip on shoe that destroys heels or will they last soaking in a puddle? I’ll bring my tool belt for anything these shoes can handle.
Thank you so much to my friend @kasey.sorsby for the Christmas treats she dropped off at work today. Kasey goes above and beyond with everything she does. Kasey, have a Merry Christmas!